Searching for the Fownhope oil well...

I have been looking on the British Geological Survey site and using their wonderful Geology of Britain interactive map.

I zoomed in on the area of interest around Fownhope, trying to find some more info about where the Fownhope oil well was.

The first overlay I tried for Boreholes only revealed a black dot and what I knew already - there were a number of Boreholes in the area (red dots) and a couple were confidential records (black dots) - but I have come across a number of water boreholes where the owners have chosen to remain confidential so not odd.

So I tried a different overlay and came up with a black dot and a red square :)

Just below these words in the top left hand corner you will see a road labelled "Haugh Wood"
below that road, and above and to the right of Rudge End Farm, you will see a red square overlayed by a black dot. 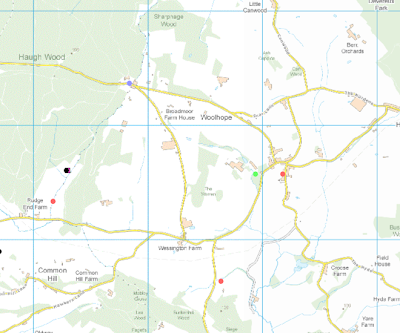 I was then able to look up in a very large Excel file the licence details, the  date the licence was granted and all sorts of other stuff.

I also found the UK Onshore Geophysical Library very helpful for finding wells and I spotted one other oil well in Herefordshire, at Collington, near Edwyn Ralph which was drilled in 1967
Posted by frackfree at 11:03

frackfree
Herefordshire, United Kingdom
I live in East Herefordshire, near to one of the sites mentioned as a possible "Unconventional Shale Gas " site. I am an Engineer, although not a Geologist. I don't want to see people or the environment adversely affected by Fracking.